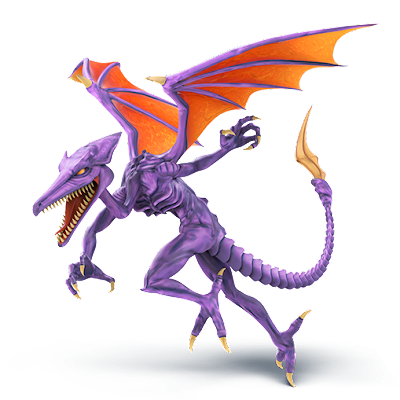 Hello all, and welcome to the first in a series I hope to keep going for some time, or at least until the new Super Smash Bros. comes out.  I'm going to be listing a whole bunch of Nintendo characters (as well as other third-party video game characters) and talking about them in a would-be analyst way in terms of who they are, how they'd play, and their chances of being playable in Smash Bros.!  I'm not going to pretend that I know what I'm doing, or that I did any research going into this; most of this stuff I'm just winging and based off of knowledge I've accumulated from this or that resource over the years.  Hopefully you'll be interested enough to hear what I have to say, though.

For our first character, we're going to start things off in a BIG way (though I am LOATHED to use that word when talking about him): it's Ridley from the Metroid series!  See my ramblings after the break!
Read more »
Posted by Smashmatt202 at 2:04 PM 2 comments:

I don't know how many people read my blog, but in case you couldn't tell from the blog's name, I love Super Smash Bros.!  For me, it's the ultimate love-letter to long-time Nintendo fans (and preferably I'd like to keep it that way and not lose sight of that with certain unwanted addition, i.e. characters who have nothing to do with Nintendo and characters who aren't even from video games).  It's been on my mind a lot recently, what with the announcement of a new installment on the Nintendo Switch, particularly what characters they could add to the series.  Super Smash Bros. for Nintendo 3DS and Super Smash Bros. for Wii U had the biggest roster yet, and some say it'll be hard to top, though I could certainly think of some new additions that would either shake up the roster a bit, or even improve it, and I don't just mean bringing back the Ice Climbers!

So here's what I'm going to do: for as long as I have the brain power and dedication able to handle doing this, I'm going to see if I can do one blog post a day detailing potential newcomers for Super Smash Bros. on the Nintendo Switch.  Each entry will go over who the character is, what they can do in Smash Bros., how much I'd like to see them, their actual odds of getting in (based on what I know about the series and its director Masahiro Sakurai), and perhaps a few extra details I feel like adding.

This'll probably be a big mistake, and I'll end up biting off more than I can chew with this, but hopefully it'll be a lot of fun as well.  Stay tuned.